You may think of prosecco cocktails as light and bubbly, but this cocktail competition produced a bevy of complex sips, all with a bit of bubbly in the mix. I love attending a good cocktail competition! I always come away with great ideas and discoveries in many categories—spirits, mixers, infusions, syrups, and clever garnishes. This one was no exception.

Hosted at Seamstress, on the upper east side of NYC, seven mixologists competed to see whose mix of exotic ingredients would please the judges. Blaine Ashley, the founder of New York Champagne week orchestrated the fantastic event (seen in the photo at the top of this post) showed up on the scene with the prototype of her new rosé wine). All in all, it was a great way to spend a late afternoon, with bottles of Cinzano Prosecco. It was fun visiting each table and hearing a little bit about the mix and inspiration. Trish Rosienne reveals her cocktail secrets. Right: husband and wife competed: Nicole and McSon Salicetti.

Let these creative cocktails inspire you to create one of your own for your next get together. Or just visit the mixologists at their locale and have one specially mixed for you. Four by Fire (the winning cocktail)

This one had a smoky twist to it.

—by Nicole Salicetti of Railway Bar Italian prosecco with a Mexican influence.

—by Stevie Gray of Cecconi’s Dumbo A foodie approach to cocktails. A heady mix of strength and fire.

—by Becca Pesce of The Dead Rabbit On the lighter end of the spectrum. This was my favorite of the bunch, mixed with a fantastic gin.

—by Craig Scheidlo of Ousia Another foodie approach, with a bit of smokiness.

—by Trish Rosienne of Monk McGinn’s Judge Francine Cohen sits aside the line of contestants. Right: the crowd waits while the winner is announced. 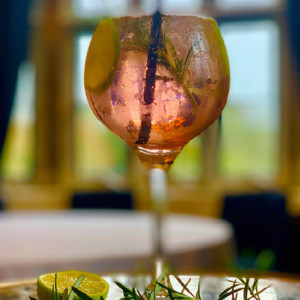