Fighting for justice, equality, and democracy, the LDF 32nd Annual National Equal Justice Awards Dinner honors those for their lifetime achievements. Hobnob was on the scene to soak up the positive vibes. Fighting for justice, equality, and democracy, the LDF 32nd Annual National Equal Justice Awards Dinner honors those for their lifetime achievements. Hobnob was on the scene to soak up the positive vibes.

In honor of the upcoming election I thought to highlight an organization that is fighting to support everyone’s right to vote. In LDF’s (NAACP Legal Defense Fund) Prepared to Vote initiative they have contacted elected officials insisting electronic voting machines are in working order, demanding the end to intimidating voters, and have filed a lawsuit supporting early voting rights for college students. The event was filled with inspiring speeches, an educational video, and appearances of VIPs, luminaries, and celebrities.

The event took place in the Ziegfield Ballroom, NYC, where almost 800 people gathered to network and applaud their associates. The room was beautifully outfitted in silver and cast in tones of a soothing, deep blue. There was a joyous, celebratory mood in the air, and a delicious assortment of food and libations to boot. Scroll down to see the red carpet scene and the fab menu.

(seen in the photo at the top of this post) Honorees Dr P Roy Vagelos (former CEO at Merck) and wife Diana pose with Bryan Stevenson, who were all being awarded a Thurgood Marshall Lifetime Achievement Award. The signature cocktail, called Justice, was a potent mix of Johnny Walker Black, sugar, bitters, lemon, cherry, and orange. Both walls of the space were bathed in videos, adding to the statement and atmosphere. Avocado toast was passed during the cocktail hour. Honorary Chairs Kenneth and Andrea Frazier. Kenneth is current Chairman and CEO at Merck. U W Clemon, with wife and daughter, one of the Honorees for a Thurgood Marshall Lifetime Achievement Award. He is a retired federal district judge and civil rights lawyer. Crab toasts. Putting the final touches on the scene before guests arrive. 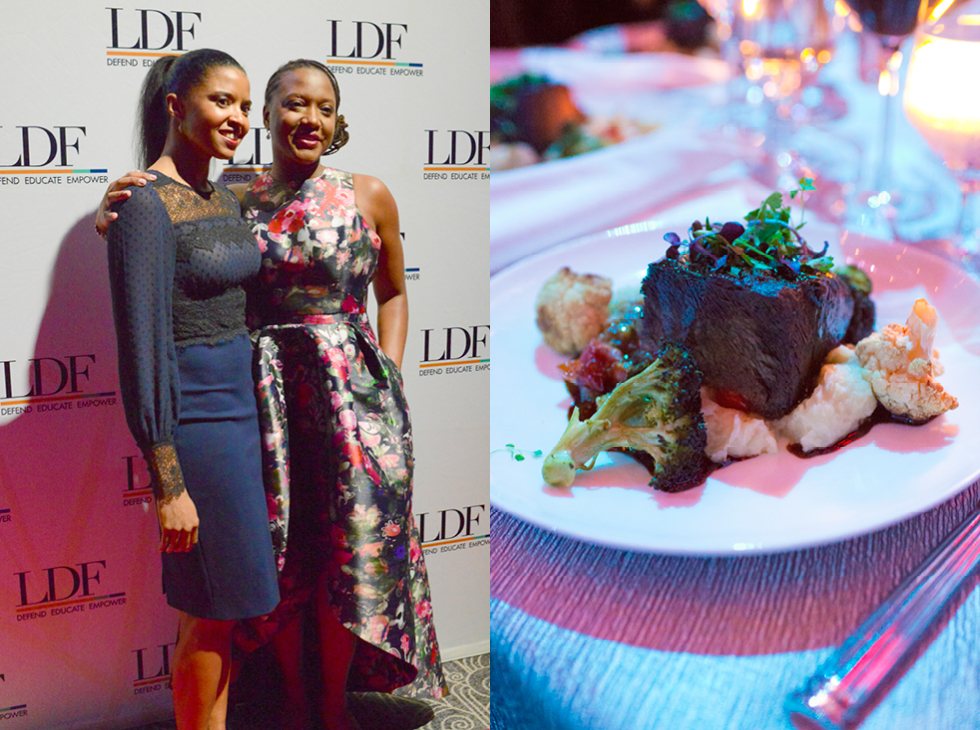 A detail of the flower arrangements at the tables. Photo, right, film producer Crystal McCrary produced a fantastic documentary for the event. Mingling near the red carpet. Tiramisu minis on the dessert bar.

The 32nd Annual National Equal Justice Awards Dinner is put on every year by  LDF  a non-partisan 501 (c) (3) nonprofit organization. They do not promote any candidates or political parties. Their mission is to seek structural changes to expand democracy, eliminate disparities, and achieve racial justice in a society that fulfills the promise of equality for all Americans. Head here to donate to this worthy organization. Quiet Dance Floor: Is This the Future? Dancing with Headphones Around NYC