Charlie Bird delivers on solid American cuisine with the city’s most succulent chicken.—among other things. See why the regulars keep coming back and photos from our fab dinner. Who to Take: a sophisticated New York foodie or a wine connoisseur

I was re-connecting with my dear fried Jennifer and knew I had to choose a spot for us to rendezvous that had a nice wine list, superb American cuisine, and a casual environment. Charlie Bird fit the bill, so to speak, and allowed us to catch up while indulging our senses. To start the meal off right, we got a bottle of 2015 Savary Chablis Sélection Vieilles Vignes, which was truly spectacular, especially for us white-wine-aficianados. That immediately called for a half dozen Wellfleet Oysters, which were served with a New York apple vinegar.

For the entrees, the hit of the night was the Roasted Farm Chicken served with sea salt potatoes and crispy bit salad. The portion was noteworthy, and the chicken was cooked to perfection—tender, juicy, and full of flavor. Some of the best chicken I have ever eaten in NYC, and that’s saying a lot. Also, nice was the Montauk Monkfish which had a side of baby artichokes and turnips in a lemony broth. Light and healthy all ‘round. In keeping with the healthy regimen, we got sides of Broccoli Rabe in garlic and hot pepper and the adorable Migliorelli Farm Carrots in aleppo pepper with ricotta salata. What a feast! 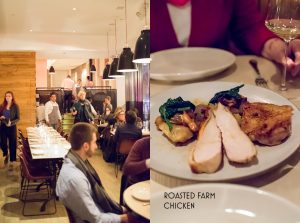 The space is airy and slightly industrial, with lots of whitewashed brick and table tops. We sat in the upstairs area which had a decent noise level, so even though the tables were close together there we could easily converse. Noted, at the bar in front, encased in glass is an antique and rare collection of grappa on display—a fave of one of the owners. I foresee a future visit here, with an early dinner at the bar, with nice glass of wine.